Recommended ski reosrts for powder skiing and riding in Japan

Powder riding (powder skiing) has grown in popularity globally in recent years. Especially Japan becomes a hot spot for the powder skiing and powder boarding because of volume of snowfall and quality of powder snow. In Japan, there are a lot of ski resorts in which you can enjoy deep fresh powder snow. In this page we will introduce recommended ski resorts for powder skiing/riding, which offers attractive off-piste slopes and tree-run areas. In Japan still many resorts prohibit skiing out of the course and tree-run. From this point it is important to select a correct ski resort for powder skiing/riding. 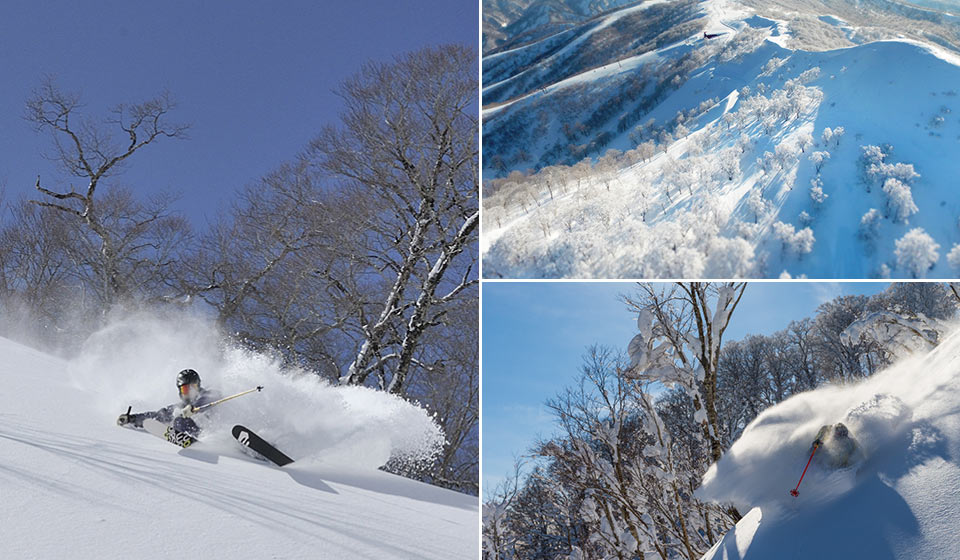 Geto Kogen ski resort is located in Kitakami City of Iwate Prefecture in northeastern Japan,Tohoku. Geto Kogen is famous for its heavy snowfalls, being located in a mountainous "snow magnet." The average snowfall per season at the top of the resort is over 25 meters! It is said that "the powder snow of Geto never dies, it revives." This implies that the supply of snow is almost endless. In addition to the volume of the snow, Geto offers fantastic high quality dry powder. The highlight of Geto Kogen is the abundance of off-piste slopes and tree run zones. For the 2019-20 season, the number of tree runs expanded to six zones, where wonderfully deep, fresh powder snow can be enjoyed. As for ski runs except for a few beginner and intermediate courses, most runs have been kept as off-piste. There are numerous opportunities for enjoying deep powder snow compared to other Japanese ski resorts. 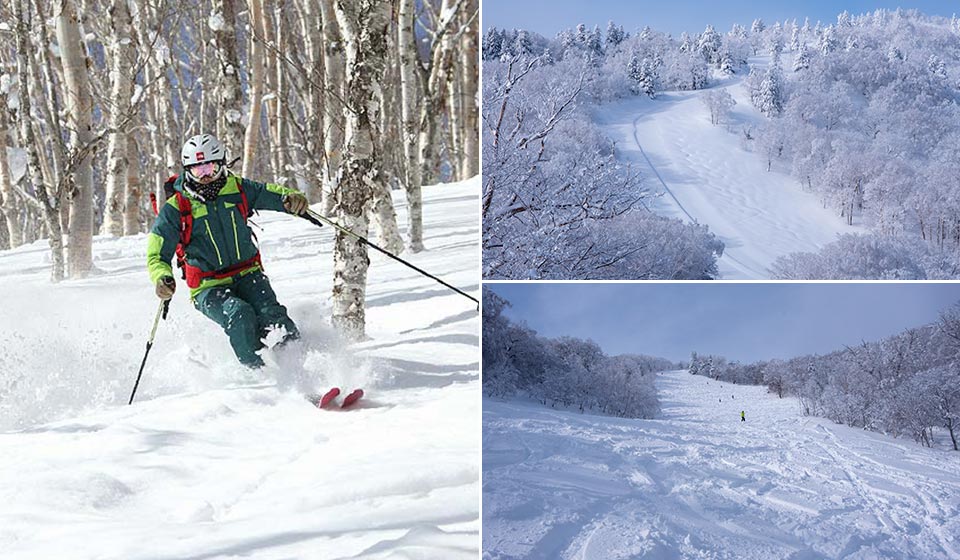 Appi Kogen is one of the largest ski resorts in Japan located in Hachimantai City of Iwate Prefecture in in northeastern Japan,Tohoku. It has a vast ski area of 282ha and a wide range of long courses. Appi Kogen is also famous for its dry powder snow. Located at 40 degrees north, Appi is on the same latitude as world-renowned ski resorts such as Arlberg (Austria) and Aspen(USA). In addition, the slopes of Appi are on the north side of the mountain. Due to these reasons, Appi's snow quality is the finest in Honshu(We can say as good as Hokkaido). In recent years, Appi has enhanced its tree run zone and off-piste area. Tree run zones have been expanded to approximately 60 ha for the 2019-2020 season. The tree run zones are controlled by gated and most of the gates are accessible from major long cruising courses of Appi which is another highlight of Appi. So you can enjoy both powder run and long cruising together! 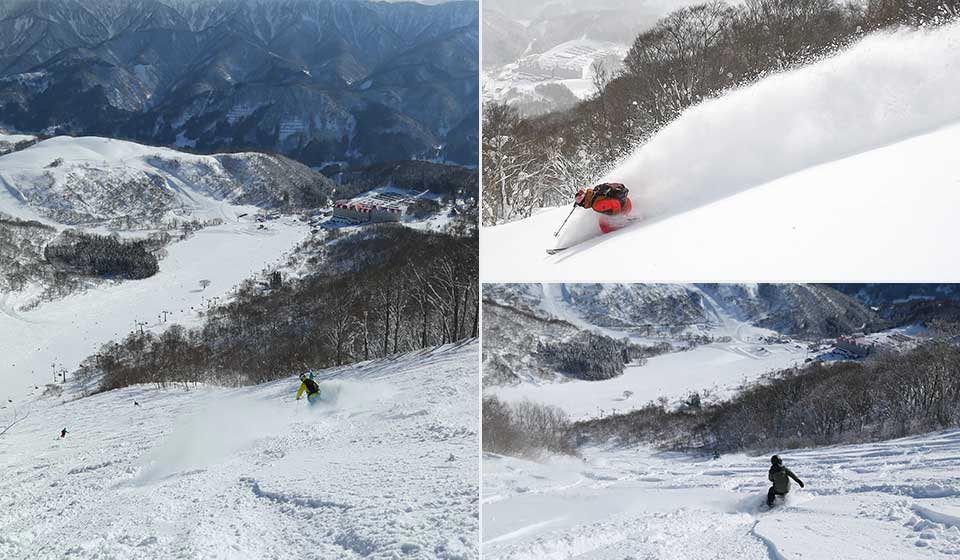 Hakuba Cortina ski resort is located in the village of Otari, 10 km north of Hakuba in Nagano Prefecture. Being located in the northern part of Hakuba region, it receives relatively more and better snow than other resorts in the Hakuba area. Highlights of the Hakuba Cortina include the quality and volume of powder snow, as well as the abundance of off-piste slopes and tree trails in the "self responsible area." The Cortina's off-piste rules are not as stringent as those of other Hakuba ski resorts, skiing outside of the marked courses is permitted in a "self responsible area." This means you can ski almost anywhere in the resort, except for a few prohibited areas. On the day following heavy snowfall, a so-called "big powder day," many powder snow people head to the Cortina and eagerly await their chance to enjoy the slopes.

Hakuba Happo One ski resort is a large-scale ski resort which is located in Hakuba village in the northern part of Nagano Prefecture. It has 220 hectare terrain, 23 lifts and 1,071 meters elevation difference. It is also well known as a venue for the 1998 Winter Olympics slalom and downhill races, as well as the ski jumping. The elevation of the Happo-One's peak is 1831m, which is the highest in the Hakuba area. The upper part of Happo-One is over the tree line (forest limit) in the so called sub-alpine area, unlike most of the other resorts that are below the tree line. This higher elevation produces heavy snowfall and better quality powder snow. Especially on the north side of the ski resort there are several popular off-piste slopes, such as Kurobishi, Ura-kuro, Skyline etc. Happo one has opened several attractive off-piste areas called "designated area" as a self responsible area such as "Urakuro-off-piste","Omusubi", "Tenbo" etc.. These off piste slopes enhance attractiveness Happo one.

More Information about Happo One 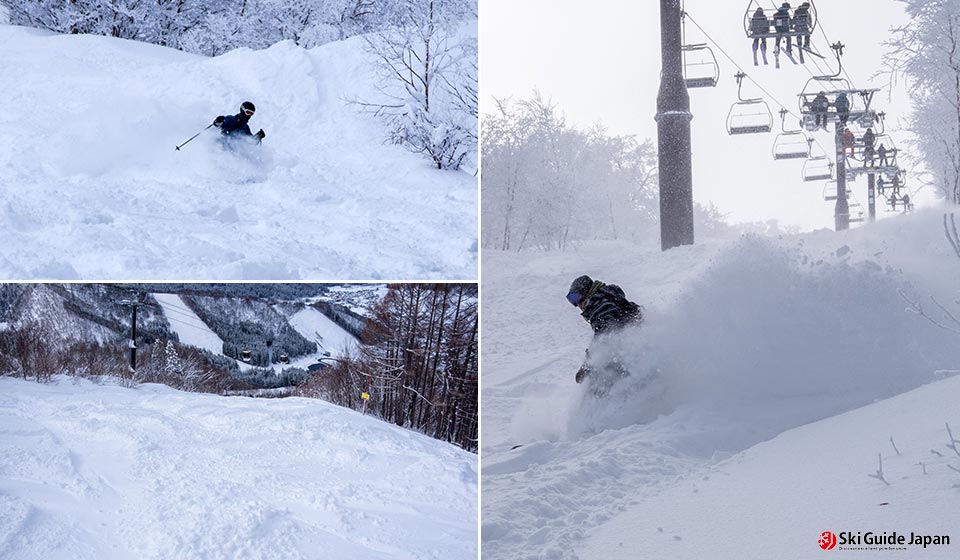 Nozawa Onsen is located in the northeast region of Nagano Prefecture in Honshu (main land), close to the border with Niigata Prefecture. It is the 4th largest ski resort in Japan, which has 20 lifts, 36 courses, an area of 297 ha. Nozawa Onsen is also famous for large amounts of snowfall and high quality powder snow. Especially, Yamabiko area located near the peak of the Mt.Kenashi (1650m) has many snowfall and in that area skiers have a lot of chances to enjoy deep fresh powder snow and tree-run. It offers a variety of off piste slopes throughout from the base to the peak of the mountain. Very well laid out two gondolas and 18 lifts and realize efficient, smooth skiing in the vast area. These days, the Nozawa Onsen become the one of the most popular ski resorts in Japan for international travelers. 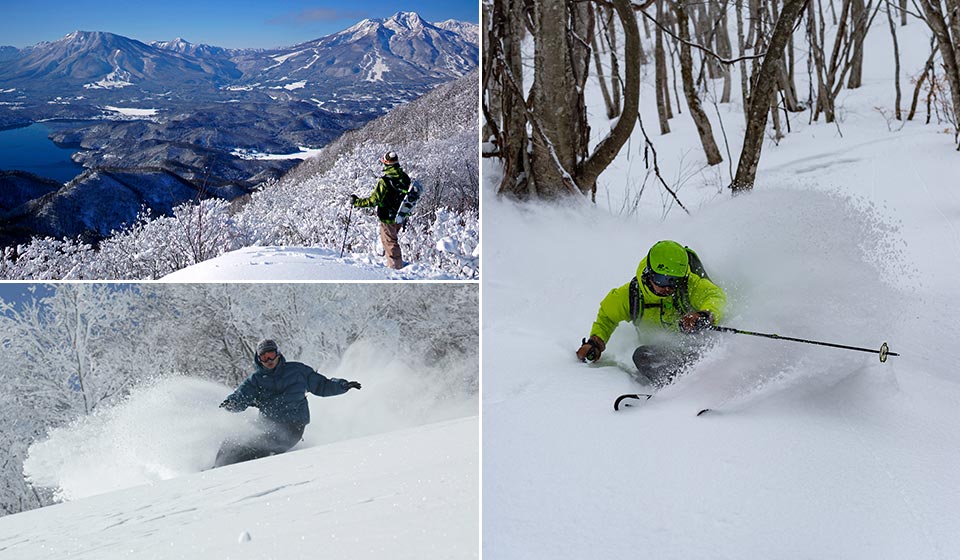 Madarao Kogen ski resort is located in Iiyma City in the northern part of Nagano prefecture, on the border between Nagano Prefecture and Nigata Prefecture. Madarao is a medium scale resort which has 31 courses, 13 lifts, a vertical drop of 440m (910m -1,350m), and the area of 75ha. Madarao Kogen is well known as a heavy snowy area which has average snowfalls in the realm of 10 to 13 meters per season. Recently Madarao have expanded tree-run area very positively. As of 2019-20 season it offers total 11 tree-run area, it is the largest number among Japanese ski resort. Tree run areas of Madarao gain acclaim for good maintenance and effort to make them more safe and convenient for skiers such as easy approach to the gates of the area and glading of trees. In recent years Madarao has become increasingly popular with international visitors due to the high quality of snow and richness of tree run area.